Trust me, boys and girls, this is one epic lady of epic wonderfulness. Over to you, Shehanne,

It’s all smoke and mirrors.

Let’s face it, it’s what the spooky season is all about. The pumpkins, the witch’s hats, the plastic fangs are probably incidental, if you really want to terrify, the real power is in the suggestion, in creating an illusion.

Faith being Faith, I have to mention a film here, but think Robin Hood Prince of Thieves—I did a lot after seeing the Russell Crow version--that scene where good old Kevin winds up in Sherwood Forest...   Spooky, haunted Sherwood Forest. 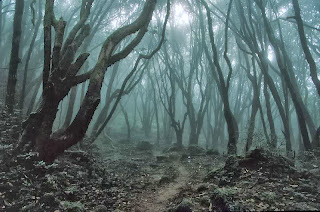 The outlaws know they can’t fight the Sheriff, so what do they do? They hang up a few wind chimes and put it about that the place is haunted. That way anyone going in is doing it at their peril.

On Dartmoor in England, the notorious squire Cabell was said to have been a huntsman who sold his soul to the Devil. When he died in 1677, black hounds appeared around his burial chamber.  This is the story that inspired Conan Doyle to write the Hound of the Baskervilles. 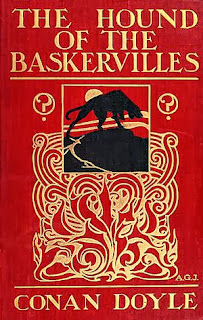 Conan Doyle of course had to bring it up to the then, present day, He used the story as a potent backdrop--we all love legends, especially ones with that hint of mystery and darkness about them—but the creation of the ‘present’ day hound was all done with smoke and mirrors. Some phosphorous in other words. The misty, forbidding moor, the subplot of the escaped convict, soon does the rest.

I confess to being a smoke and mirrors junkie. Films, books where there’s a lot of manipulation going on behind the scenes to make it look other than what it is, for whatever reason, good, or bad, have always fascinated me.

So when it came to considering how a small group of men would defend their turf from stronger, more brutal forces, in my latest book, His Judas Bride—big surprise--I  decided on smoke and mirrors.

Callm McDunnagh, the chieftain’s older son’s wife was murdered, and tired of raids on the glen, he sets up the Brotherhood of Wolves—motto live together die as one. These guys are fabulous fighters, but it takes more than that to keep their enemies at bay.   There’s the fearsome way they dress, look, the fact they live like bandits in caves, and of course the stories that circulate, especially about Callm, the Black Wolf. 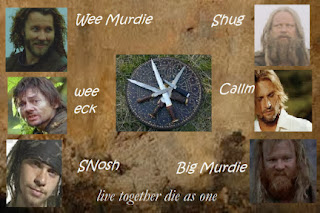 Did he really sell his soul to the devil the day his wife was murdered, to exact revenge and gain a warrior’s prowess? Is he supernatural? As one reviewer said the ‘kind of man who would sooner cut your throat than ask politely that you get the hell out of his glen’?

Or is he really just flesh and blood?

This being smoke and mirrors, I’m not answering that. 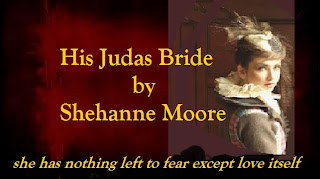 Blurb To love, honor, and betray…
To get back her son, she will stop at nothing…
For five years Kara McGurkie has preferred to forget she’s a woman. So it’s no problem for her to swear to love and honor, to help destroy a clan, when it means getting back the son she lost. But when dire circumstances force her to seduce her fiancé’s brother on the eve of the wedding, will the dark secrets she holds and her greatest desire be enough to save her from his powerful allure?
To save his people, neither will he…
Callm McDunnagh, the Black Wolf of Lochalpin, ruthlessly guards heart and glen from dangerous intruders. But from the moment he first sees Kara he knows he must possess her, even though surrendering to his passion may prove the most dangerous risk of all.
She has nothing left to fear except love itself…
Now only Kara can decide what passion can save or destroy, and who will finally learn the truth of the words… Till death do us part. 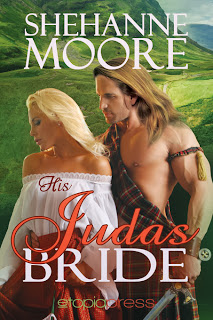 Shehanne Moore writes gritty, witty, historical romance, set wherever takes her fancy. What hasn’t she worked at while pursuing her dream of becoming a published author? Shehanne still lives in Scotland,  with her husband Mr Shey. She has two daughters. When not writing intriguing historical romance, where goals and desires of sassy, unconventional heroines and ruthless men, mean worlds collide, she plays the odd musical instrument and loves what in any other country, would not be defined, as hill-walking.
Her second book featuring a hottie scottie, His Judas Bride was recently released.