I usually make light weight posts but today I have to talk about something that’s really important to me.

When I was younger I was very into politics, music and boys – but not necessarily in that order. Now I’m a grumpy woman of a certain age I’ve lost a lot of the passion of my youth. Perhaps that’s why I get obsessed with things that even I know are silly and unimportant. Perhaps it’s because I now feel so powerless to make a difference. Whatever the whys and wherefores, I don’t get passionate about things that matter anymore, but this man mattered to me, and still does.

It’s taken me a few days to work out how I feel about his death but I was profoundly saddened when I heard. There are so few heroes anymore, so few truly great people. Obviously I never knew Mr Mandela but that’s how he seemed to me, a good man, a decent one. So many that met him remarked on his lack of bitterness when he came out of prison, how he was focused on unification, not revenge.

My kids view him as an important man from history, along with people like Martin Luther King or Ghandi. To me he’s much more. Perhaps that’s because I have such memories of the time he was in prison and his release.

I went to the library – no google back them! – and researched him. I was fascinated and inspired. He was part of my political education and growing up.

The day of his release I sat in front of the TV and watched for hours.

Like so many millions around the world, Nelson Mandela meant something important to me. He will continue to be a symbol of how to hold true to your ideals and stay a decent person, in a world that is increasingly fast paced and harsh. 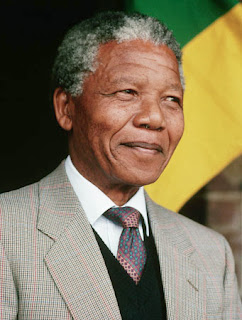