Those of you that are familiar with my unpublished work will know that sometimes I like a story with challenging themes. If you do as well this might be the book for you. 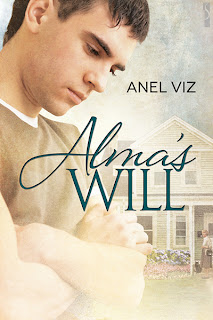 I’m so grateful to Faith for the opportunity to plug Alma’s Will, a novel that means a lot to me. I’m also nervous since this is my first time on another person’s blog except to be interviewed, and I don’t even blog on my own blog. On top of that, while none of my books are traditional romances, they have at least some connection to the genre. Alma’s Will does not, and I know that romance is what the people who read this blog are looking for.

What makes this book not a romance is that it isn’t about love; it’s about hate. There are two gay couples in a loving relationship, there are even a couple of sex scenes, and at one time or another I give the POV of some fifteen different characters, but it is Liv, a homophobic woman, who holds center stage. A reviewer once wrote that I write about the psychological connections between people, and that is certainly true here: Alma’s Will is a study of bigotry that tries unsuccessfully to explain this kind of hatred. I draw no conclusions because if the characters are truly real, no author can know them inside and out. Besides, this kind of hatred surpasses my understanding. I can understand disapproval, discomfort, dislike, even disgust. After all, there are things I disapprove of, things I dislike, things that make me uncomfortable and perhaps disgust me, though same-sex relations is not one of those things. There are things that make me angry. But I cannot feel the same degree of hate for Liv as she has for homosexuals. As one character says, “you'd think she blames gays for everything bad that’s ever happened to her.”

Alma’s Will is not a “feel good” book, but it is not a sad one, either. Of the many strong emotions I hope it will stir up in my readers, the dominant one should be rage. For all that, the story is not a downer since it is also about people who in standing up to such prejudice demonstrate a greater sense of their own worth than the bigots. Hatred is ultimately self-destructive.

.
My email address is escuiruel@gmail.com.

An old woman’s dying wish to turn her house into a safe home for troubled gay teenagers stirs up painful memories and bitter resentments, but also leads to tearful reunions and—someday, perhaps—to healing.

Livia Redding returns to Macon, Georgia, with her husband and children after her mother’s death to settle her estate. She is shocked and offended to hear that the will stipulates that her house be used as a safe home for gay teenagers rejected by their families. Against her husband’s better judgment, Liv decides to contest it and stay on in Georgia with their children.

But her mother had a reason for making the bequest: her son, Ronnie, who disappeared a quarter-century ago, after his father threw him out of the house because he was gay.

Excerpt:
Alma's attorney, Evan Marker, had expected that reading the will would go without a hitch. Her daughter might expect to inherit everything as sole surviving heir, and the house did make up about one third the value of the estate, but the remaining assets all went to her—its contents, the car, stocks, savings, etc. As he understood it, she and her husband were fairly well off, and he doubted she would make a fuss over a charitable contribution, even one as sizable as her mother's house. It was a touching gesture on the old woman's part, really.

The meeting started off well enough. The only possible annoyance he foresaw was that Mrs. Enslik's daughter and her husband had brought the grandchildren with them, as was only natural under the circumstances. Their grandmother's funeral must have been hard on them, and it wouldn't be a good idea to leave them in a strange place with a babysitter they didn't know. Still, they looked very young—the boy couldn't have been much more than kindergarten age—and Marker feared they'd get bored listening to the will and become fidgety.

"You're Mrs. Livia Redding, I assume?" he asked.

"Liv, please." She introduced her husband and the children.

Marker had his secretary bring some paper and colored pens to keep the youngsters amused and sat them on the floor by the coffee table. "We'll have to wait for two other people who're mentioned in the will," he explained. "They should arrive any minute."

It seemed they'd already met Mr. Christ, which was hardly surprising, considering the two lived right next door to her mother. Liv beamed with pleasure when she saw him, and said, "I'm so glad Mama thought to remember you in her will. You've been so good to her. Do you know what Mr. Christ has done?" she added, turning to Marker, and went on to gush about what wonderful care he'd been taking of her mother's garden.

"It came as a total surprise," the man answered. "We just got Mr. Marker's call last night. You remember my friend Jay?"

"Of course. How nice to see you again."

Jay shook hands with her. Without the black hat and veil, dressed casually in a blouse and slacks, one could see she was a good-looking woman, about thirty, with soft features and short dark hair. She had a pleasant smile, the only thing about her that reminded Marker of her mother. Her demeanor was appropriately grave for a lawyer's office and reading a last will and testament, but something about her struck him as carefree—too carefree, he thought, for someone who had just lost her mother. Her husband, on the other hand, looked bored and anxious to get it over with.

They sat down. Marker opened the envelope and took out the will. Just then the little boy came over to show his mother the picture he'd drawn.

"That's beautiful," she told him, "but Mommy and Daddy are very busy right now. You save up all your pictures and show them to us when we've finished, okay?"

Li'l Eric nodded gravely and went back to the coffee table.

All these good feelings didn't last long. Liv did a double take when she heard "except the house", and when he read on "which is to be used as a safe home for gay teenagers who've been rejected by their families", her face froze.

She turned her fury on Marker. "You knew this," she said, "and still you went ahead and read her will with my children right here!"

"Calm yourself, Liv," her husband said. "I don't think they heard a thing. They weren't paying us any attention… until now."

The children had heard the tone of their mother's voice and were staring at them, troubled and confused.

"I'll have my secretary watch them," Marker said. He pushed the button on his intercom. "Carole, could you please bring the children to the outer office while we finish up in here?"

The children safely out of the way, Marker returned to the will. Since she knew of no local organizations that helped gay teenagers, Mrs. Enslik had designated Messrs. Franklin and Christ to choose one and to oversee the transfer. She had reserved a thousand dollars to cover whatever expenses they might incur.

"We won't take the money," Franklin said. "That goes to the safe home too."

He seemed perfectly unaware of the daughter's hostility, though her anger hung so heavily in the air one could have cut it with a knife. Not so the black man, Mr. Christ. He'd fixed a stony gaze on Mrs. Redding and braced himself for an onslaught. Perhaps he picked up on the cues more easily, being from the South, or perhaps Franklin had his mind on something else.

"Those homes do so much good," Franklin went on. "The one that took me in saved my life."

If she hasn't yet realized that the men are gay, she's certain to catch on now, Marker thought, but Liv took no notice of what had just been said. For a second he wondered if she was just uptight about her kids hearing anything having to do with sex, then dismissed the possibility out of hand. The woman was definitely homophobic, rabidly so. He could read her like a book. Well, better to get it over with. It was none of his business, really.

"Do you know a suitable organization to donate the house to?" he asked the men.

"Not here in Georgia," Franklin said, "but the home I lived in in Boston can put us in touch with one."

"What home in Boston?" Liv began. Then it hit her. Instantly, her good looks vanished. Her features hardened and her mouth twisted into a grimace. "Oh, Jesus!" she exclaimed.

The intensity of her reaction seemed to bewilder her husband. Since he must have known what she thought of homosexuals, Marker concluded he must have understood all along that Christ and Franklin were a gay couple and only now realized that his wife had not.

"I won't allow it!" Liv finally found her voice. "Couldn't she have left it to a Christian group that works on curing these youngsters?"

Christ put a hand on his partner's wrist and clenched it tightly. "Steady, Jay."

"Then you're contesting the will?" Marker asked.

"Are you sure, Liv?" her husband asked. "Do you think you should?"

"I've never been surer of anything in my life. It's my decision. I'm her daughter."

"I only want to spare you what could be a very unpleasant business in the long haul. Do you think it's worth it?"

She turned to Marker. "Are these men willing to give up their claim?" She wouldn't speak to them, wouldn't look at them.

"It isn't their claim," he reminded her. "They're only acting as representatives."

"And we're not willing," Christ said in an icy voice.

Liv glared at them. "I'll fight it tooth and nail."

"Then I advise you all to get yourselves a lawyer," Marker said.
Posted by Unknown at 13:05