I'm celebrating the release of Knight and Butterscotch with a GIVEWAY!

You can buy Knights and Butterscotch here:

There's a problem with Amazon but hopefully it will be up there soon.

**GIVEAWAY**
Or if you'd like to win a copy leave your name, email address and say who's your favourite hero either here, on my other blog or Facebook. I'll pick a name out of the hat on Wednesday 25th 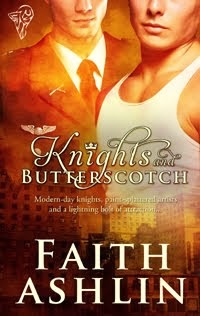 I've always loved the idea of a rough and ready hero, one who tries to do the right thing no matter what the cost to himself. A man who has honour and a sense of duty, which he holds true to quietly, without a fuss. I think we all know the type, from Charlton Heston's Rodrigo de Bivar in El Cid, to Orlando Bloom's Balian in Kingdom of Heaven. The rugged hero.

I'm sure it's partly because I'm ordinary, unexciting and I really like my creature comforts. I like central heating and knowing I have somewhere safe to go home to and a future to look forward to, however predictable it may be. That makes the brave and true hero seem all the more appealing.

But I wanted to take the idea of a hero one step further and make him a knight, like the romantic ones we think of in old Camelot. Respected and valued for what they did and what they stood for. I didn't want him in a silver suit of armour or on a white horse, though. No, I wanted my knight to be a modern day one with an armoured vehicle and the latest weapons but still that sense of honour and duty. You have to admit it's a lovely idea.

But how would my hero-knight cope if hit by a thunderbolt of lust that has him acting in crazy ways? It gets even more interesting when the lust turns into love. Add in a background of war and a desperate turn of events for King and country and things got really complicated. I wanted a story about love being put to the test by brutal events

A story of modern-day knights, paint-splattered artists and a lightning bolt of attraction that hits hard enough to make a knight think he's going crazy. And then things get complicated.

The year is now, the place is somewhere like here but the feeling is very different. Matti Elkin is a modern-day knight and, while he may not have a horse or a suit of shining armour, he's brave and true, has a sense of duty and honour a mile wide and a passionate belief in his king.

There's a war on and the knights are fighting hard, but while on R&R Matti is hit hard with an overwhelming attraction for Jamie, a tall, handsome painter.


Jamie makes his head spin and his cock harden, and has him acting in ways that make him question his own sanity. But when the war takes an appalling turn, they are both thrown into a world of confusion that has them questioning everything they thought they knew.
Posted by Unknown at 00:44