Knights and Butterscotch is now available to buy from the Total-E-Bound!


A story of modern-day knights, paint-splattered artists and a lightning bolt of attraction that hits hard enough to make a knight think he's going crazy. And then things get complicated. 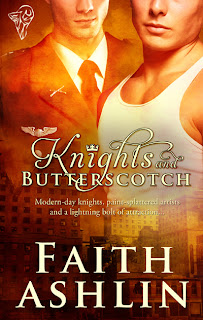 The year is now, the place is somewhere like here but the feeling is very different. Matti Elkin is a modern-day knight and, while he may not have a horse or a suit of shining armour, he's brave and true, has a sense of duty and honour a mile wide and a passionate belief in his king.
There's a war on and the knights are fighting hard, but while on R&R Matti is hit hard with an overwhelming attraction for Jamie, a tall, handsome painter.
Jamie makes his head spin and his cock harden, and has him acting in ways that make him question his own sanity. But when the war takes an appalling turn, they are both thrown into a world of confusion that has them questioning everything they thought they knew.

With rubbish timing my kid is sick (nothing too serious) and I haven't been able to get on-line to promo it but that's what general release is for, right!